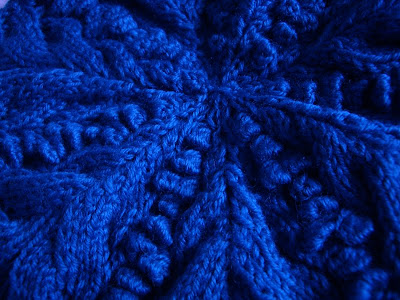 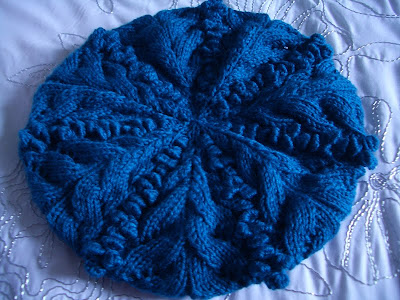 Here's a beret that I've knitted for a friend for Christmas. It looks complicated but it's not really difficult and it's definately worth it as it looks so effective. I hope you like it. If the hat is not big enough you may have to add an extra pattern repeat to make it wider. Also, a lot of people knit hats with double pointed needles or circular needles but I just can't manage that so I knit everything on straight needles. Anyway, see what you think...

NOTE: This seems like a lot of knitting needles but you need to change to smaller and smaller needles as you decrease your stitches at the end.

You can now begin knitting the main patterned part of the beret.

These 8 rows form the pattern. I knitted these 8 rows 4 times more (i.e, 5 pattern repeats) but you can knit more or less depending on the size you need. The hat I knitted is fairly small but it is best to use your own judgment according to who you're knitting for and what size head they have.

When you have reached the length you require, making sure you have completed a full pattern repeat (finishing with row 8 of the pattern) you can begin decreasing. Here's how to decrease:

Break the yarn leaving approx. 40cm of yarn to work with.

Thread your sewing up needle with the yarn and pass it though the stitches that you have remaining on your knitting needle. Draw the stitches together tightly and sew a few stitches to secure them in place. Turn the hat inside out and sew the seam together from top to bottom (finishing at the base of the brim). Take a round dinner plate and place your hat over the plate. Now steam the hat with a steam iron to block it and give it it's beret shape.

Angelina
My name is Angelina, I'm 28 and I just love to knit! I have done a degree in textile design at The University of Manchester Institute of Science and Technology (UMIST). I mainly like to make small accessories and funky bags. All of my creations are my own design. If you spot any errors please feel free to contact me at angelina.lord.611@gmail.com http://www.facebook.com/angelina.lord